« I worry a lot about my future, but I realize
the only life I want to have is this one. »

Paula and Rodrigo are young, queer artists, like many others in Berlin. Their drive to stand out leads them to form a radical performance collective. But in Rodrigo’s personal life, he needs to handle things by himself. The rehearsal room is a space of utopias, but can they make it out the door? Performance is a feature film that plays with the conventions of fiction and documentation, what is on stage and what is at stake. It describes several movements: migration within and outside of the European Union, the developments of the city of Berlin, and the search for love and identification. 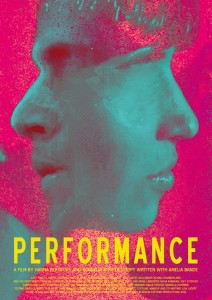 We started working on Performance in the beginning of 2012 in collaboration with playwright and novelist Amelia Bande. Together we developed the stories of Paula and Rodrigo, putting them in a familiar context: Berlin’s « young art scene ». The aim was to draw a bigger picture of the the ways we work and relate to that work, and the current state of the ever-changing city of Berlin. We wanted to find ways to critically depict this « bubble » from within.
We chose performance art as a medium in the film to symbolize the strong identification with (creative) work, which is often required in a new economy of freelancing and self-exploitation. The fictitious performance group which serves as a protagonist of the film, was a transnational collaboration between us, and performance artist and actors from various countries. The group and their performance in the film embodies Paula and Rodrigo’s hopes, in stark contrast to their daily lives. The characters’ situations are precarious, and so was the making of this film: production was done by and large without a budget and represents a collaboration of many – a community project. To further demonstrate this precariousness, we chose a form that constantly moves between genres and the modes of fiction and documentation. Working as a duo on Performance – our first feature film – from beginning to end meant even stronger working outside of industry norms, which often privilege solo genius over collaboration.